3.1 Whistling in the Wind 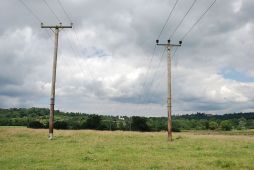 A country lane on a windswept evening can be a desolating place; the baleful wailing of the overhead wires just adds to the misery. But in your better moments, have you ever wondered why it is that wires whistle in the wind?

I came to the subject in a rather roundabout way, as part of my musical training. I studied the flute as a youngster and was shown how, with the most delicate of breaths, a gentle whistling sound can be invoked in the head-joint of a flute, even without the rest of the instrument attached. On reading up about the science of the flute I found these so-called ‘edge tones’ are closely related to the whistling in the wires.

It turns out to be quite a common phenomenon which arises inevitably when a fluid flows past an edge in its path. On a windy night, air streaming through overhead wires has to divide at the edge presented by the wire. This forces the air to pass around the wire on either side. Immediately downstream from the wire and close to it, the passing air is in the ‘shadow’ of the wire and so barely moves.  As the main stream of air on either side rushes past this quiescent zone, the edge of it drags against the stiller air, causing eddies or vortices to form a little way down from the wire. These little whirlpools of air are cast off into the main stream, from one side of the wire then from the other. An alternating sequence of them, known as a ‘vortex street’, emerges, as illustrated in the image below. 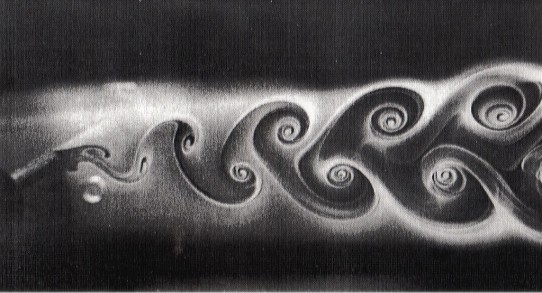 The alternating disturbances visualised in this image represent tiny oscillations in the pressure of the air in the stream, as this beautiful animation shows. 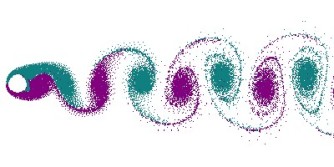 These tiny oscillations in air pressure cause the wire to move a tiny amount, up and down, in response. It is this vibration that triggers the music of the wires. The full sound we hear results from the effect of resonance in the wire once it has been set in motion by the tiny vibrations in the air. The wire will vibrate, just like the string on a guitar, at one of its natural frequencies. Just like a guitar, this frequency will depend on the distance between its fixed points. In a guitar it’s the distance between the finger on the fretboard and the bridge on the sound box. For overhead wires it’s the distance between the supporting poles. However, in the right circumstances, this natural vibrational frequency of the wire may coincide with the frequency at which the eddies are being created by the wind. When this happens, the vibration is amplified – it resonates. This is the cause of the wind whistling in the wires, known scientifically as Aeolian tones, after Aeolus, the Greek ruler of the winds.

The sound you hear is due the transmission of these vibrations from the wire to the surrounding air. This causes the pressure of the air between the wire and your ears to rise and fall very slightly, hundreds of times a second. These alternations pass through the air as a wave, much as the ripples on a pond passes outwards when a duck disturbs the surface.

Sound as a pressure wave in the air

In this way, the sound from whistling wires (or a sonorous saxophone or bawling child) is transmitted to our ears where it is picked up and interpreted by the brain as sound.

Whirlpools (aka eddies or vortices) are a more common part of everyday life than we might think. They are produced whenever a fluid, like water or air, flows past a solid object, as this dramatic image of a normally invisible situation shows 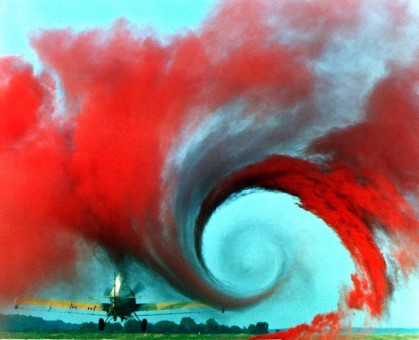 Equally common, and easier to spot, are the whirlpools created when river water flows past an immovable object, like a rock or the pillar of a bridge, for example. 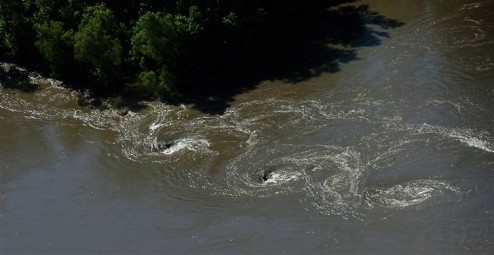 Image courtesy of The Watchers https://watchers.news/

So, next time you’re out on a windy wintry night passing by a line of telephone wires, pause a moment to reflect on the unexpected origin of the Aeolian music before you hurry home.