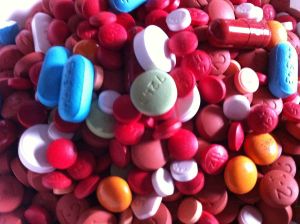 How on earth do pills know where to go? This question arose in a discussion about medicines one evening, but it’s a point that many of us will have pondered at one time or another. What happens to an aspirin once it’s been swallowed? If it’s intended to cure your headache or regulate your heartbeat, how does it know where to go? Is it tagged in some way? Does it carry some kind of destination board, like a bus: “Frontal Cortex” or “Coronary Arteries”? Of course, not – how could it navigate the route even if it did?

The answer to this question has only begun to become clear in recent decades, as the nature of the molecules in the body and the medicine cabinet have become understood in some detail. It was their precise three-dimensional structure that provided the key. With the advent of X ray crystallography in the mid-20th century it was established that molecules, whether of medicines, or bodily tissues (or almost any other kind of substance) had tightly defined structures, with all the atoms of which they were composed spaced apart at precise distance from one another, oriented at precise angles.

The molecule of caffeine in this figure illustrates this. Some of the atoms are labelled (H – hydrogen, C – carbon, N – nitrogen and O -oxygen), but others are just implied. At every vertex, where lines meet, there is a carbon atom. The length of the lines and the angles between them are all precisely defined.

Diagram of a caffeine molecule

As a result, each type of molecule has an exact, replicable shape. The shapes that different kinds of molecule adopt is central to many of their properties. Molecules in rubber for example, can twist and flex, enabling them to be stretched.

Image courtesy of The Naked Scientists

A molecule in the retina of the eye, called retinal, changes shape when light falls on it. The diagram below shows the molecule before (A) and after (B) it is exposed to light (signified by the γ symbol).

On close examination you’ll see that the two molecules A and B are identical on their left-hand sides, and on the right, they only differ in that one bond has twisted round, placing the right-hand end in a different position in B compared to A. This change in the molecule, from A to B, when light falls on it, changes the shape of the molecule dramatically. It is this that ultimately leads to the perception of light by the brain.

For medicines, the crucial question is what happens when two molecules interact with one another; how does a molecule of, say, aspirin interact with the molecules that make up your body? This is where shape matters.

The molecules of many medicines are relatively small, comprising a few dozen atoms each. Here for example are models of three well – known medicines (grey/black is carbon, red is oxygen, white is hydrogen, nitrogen is blue).

Many of the molecules that make up body tissues are, by comparison, very large containing hundreds or thousands of atoms. The action of most medicines is the result of the small molecule of a medicine interacting with a large molecule in the body – often a molecule of a protein. But, as the models indicate, each type of medicine molecule has a unique shape; it will only interact with a large molecule in the body (called a ‘receptor’) if the shape fits. If it does, it will click into place and slightly alter the shape of the larger molecule. If it doesn’t fit, it will simply pass on by.

The diagram shows how a small molecule, such as a medicine or hormone (in bright colours) can fit into an appropriate niche in the surface of a much larger protein molecule (the rough background) .

The shape of the molecule and the niche (or ‘active site’) on the receptor molecule is one important factor determining whether drug and receptor will bind together; another crucial factor is the way in which electric charge is distributed across both molecules. The two are more likely to stick together, for example, if a positively-charged zone on the drug molecule corresponds with a negative zone on the receptor.

We can now see that a pill only works where the molecules of its active ingredient meet up with a receptor molecule with which it can interact. When you swallow a pill, suck an inhaler or rub in an ointment, the molecules of the medicine course throughout the body, passing by the vast majority of locations, only stopping to interact with the body at specific sites where they match up with the surface of a receptor molecule.

In the past, molecules were often developed as medicines by making an informed guess about suitable candidates and then testing them on living systems. Folk knowledge about medicinal plants often acted as a starting point. Today, as the precise structure of some of the receptors in the body is becoming known, some drugs are designed from scratch to match the active sites on specific receptor molecules. Beta-blockers, for example are small molecules chosen to block the active sites of receptor molecules in the heart that would otherwise respond to adrenaline. 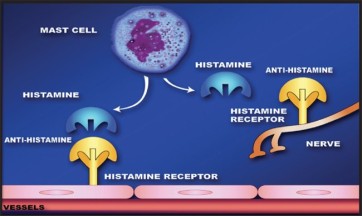 In a similar manner, antihistamine molecules block the sites on receptors in the nose, lungs and other parts of the body that would otherwise respond to histamine. For people with allergies this interference in the release of histamine from specialised storage cells called ‘mast cells’ reduces their allergic symptoms.

Image courtesy of Phn003 at the Wikipedia project

For scientists attempting to develop new drugs however, there is more to contend with than simply choosing an ideally shaped molecule to interact with a receptor molecule. Drugs have to be able to pass through membranes in the body – in the digestive tract, liver, lungs, skin or other parts of the body – without breaking up or becoming deactivated. They have to be capable of entering the bloodstream so they get distributed throughout the body. On top of all this, they must neither be toxic nor have unwanted effects on cells in the body other than the target ones and they must survive long enough as they pass through the organs of the body before being broken down. It’s no wonder drug development is such a long and laborious process.

So, returning to our original question: the pills we swallow have no route plan as they enter our mouth, skin or lungs. They pass through membranes, mostly into the bloodstream and circulate around the body until they pass close to a suitable receptor molecule in the target organ. There they interfere with the functioning of the receptor molecule (whether by activating or blocking it) and, provided they’ve been well designed, improve some aspect of our wellbeing – relieving pain, destroying bacteria or evening out irregularities in the flow of vital substances.