This crisp and silvery scene was captured on a garden pond in Worcestershire one winter morning. The crunchy reeds and diffuse reflections appealed to the senses, but it was the strict linearity of the markings in the ice that aroused my curiosity. It seem at odds with the disordered weeds and crumpled reeds nearby.

The extraordinary truth is that this geometry, at an everyday scale, reflects the order amongst atoms, a billion times smaller. Crystalline regularity connects structure at the nano-level with features on a human scale.

Molecules of many kinds will aggregate in a regular geometric array – that’s what crystals are. Molecules of water, H2O, are particularly good at doing this.

A single molecule of water has a very simple structure. It comprises two small atoms of hydrogen (white) bonded to a slightly larger atom of oxygen (red).

The bonds that hold together the three atoms of each molecule are strong. That’s why water normally remains as water, rather than collapsing into hydrogen and oxygen, from minute to minute! Any molecule is a tightly bound assembly of atoms.

A drop of water or piece of ice consists of zillions of molecules of water, cheek-by-jowl. While the three atoms in each H2O molecule are tightly bonded to each other, the molecule as a whole must also be linked loosely to its neighbours. This is plain to see, because if the molecules didn’t stick together with each other, water (or any other liquid) simply wouldn’t cohere together as a substance at all. Water wouldn’t be water – each separate molecule would simply drift away.

These bonds that link together adjacent molecules are of a much weaker kind than the ones that hold together the atoms making up each molecule. They suffice to hold together molecules in a solid or liquid form; but, as we know from everyday experience theses bonds can be overpowered, under certain conditions. For example, when liquid water is exposed to the air, the molecules can simply drift off into the air – that’s evaporation. The molecules separate from each other and disperse amongst the molecules in the air. In another example, we know that solid ice can melt, if the temperature is above zero degrees Celsius. In this case the bonds that hold the H2O molecules tightly together in the ice form are overpowered. This  enables the molecules to free up sufficiently to move past each other, whilst remaining close to one another, like a collection of marbles in a pocket. This is the nature of the liquid form, in contrast to the solid.

Molecules are always on the move in one way or another. In gas – air for example –  they buzz around randomly at high speed. In liquids they slide past each other; in solids they vibrate and stretch in various directions. Here are three animations showing these kinds of motion. Hold down Ctrl and click on the image.

Animations of molecules in motion

Water is a bit of a special case amongst liquids. The relatively weak bonds discussed above, that serve to keep molecules in contact with each other, are reinforced in the special case of water by an extra bond.

This special type of bond connects an oxygen atom on one H2O molecule with a nearby hydrogen atom on a neighbouring one. It’s an electrical attraction caused by a small excess of negative and positive charge on each of the atoms (see diagram).

These special bonds, known as hydrogen bonds, are also relatively weak. So much so, that at temperatures above the freezing point the bonds are overpowered by the buzzing around of the molecules. The water remains liquid, the molecules flow freely around each other. If the temperature reduces however, they slow down. At zero degrees Celsius (32° Fahrenheit), the movement of molecules is sufficiently slow for the hydrogen bonds to trap them. Each molecule clicks into place alongside its neighbours, with the hydrogen bonds forcing them into a regular lattice, like eggs in a tray (see the right hand side of the diagram).

Back to the pond…..it’s winter, it’s night time, the temperature is falling. Soon the chilled air cools the surface water to zero degrees. The H2O molecules hesitate, waiting for some particle or other to start them aggregating in a crystalline array. The temperature drops further, just below zero; momentarily, the water becomes ‘supercooled’. The molecules are ready to link to one another through their hydrogen bonds, but they need an initiator to start then off. Like a landslide awaiting the crucial rockfall, they are poised for action. A particle of sediment or the surface of a bacterium is all that’s needed, as a former, to enable one molecule to line itself up with the next, a third to join them, launching a cascade of crystallisation. 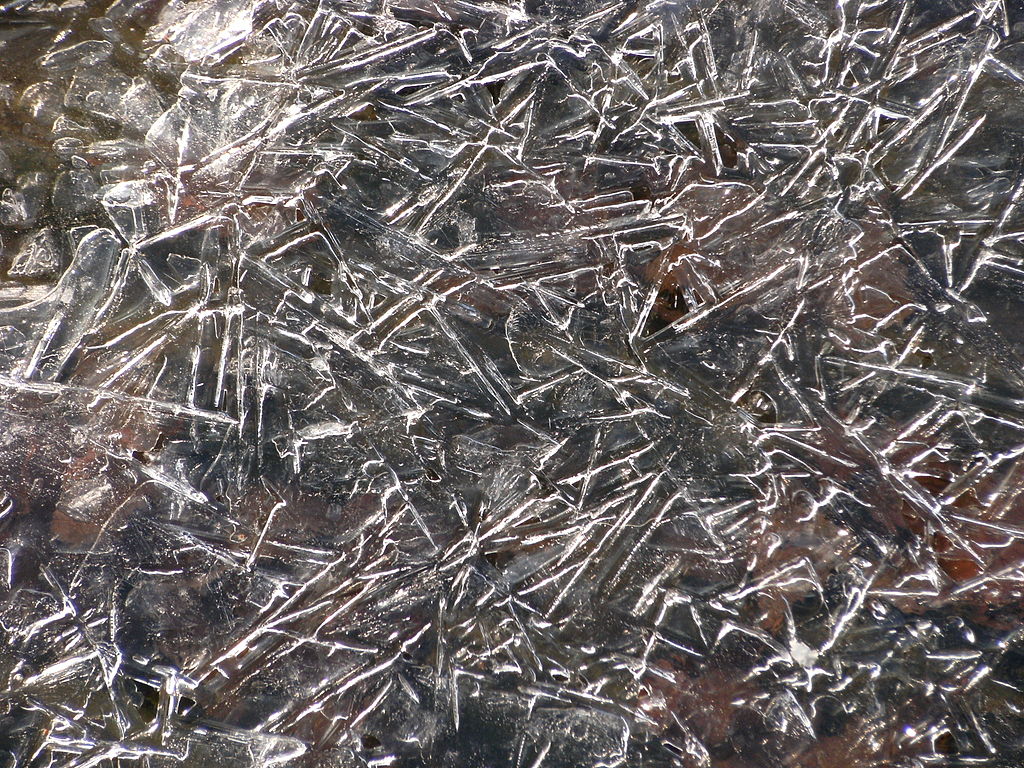 It was the strict regularity of the shooting lines on the surface of the pond that caught my attention at the beginning of this story. Now we can see that these markings, on the everyday human scale, reveal the extraordinary regularities that bind together the ultimate particles of which all matter is composed.